Join a creative community focusing on a unique animal each month.

Adult African penguins stand at 45-60 centimeters and weigh an average of 3.1 kilograms.

African penguins have black plumage on their backs and white feathers with variable amount of black spotting on the breast and belly. They can be recognized by the broad, black breast-band that straps across the top of the chest and frames the stomach. These penguins also have a horseshoe-shaped white band that travels from the bird’s neck and around the back of the head to the beak. They have a distinguishable bit of white, bare skin that resides over the eyes in a horseshoe-shape that becomes bright pinkish-red in very hot conditions.

During breeding, male and female African penguins are most distinguishable from one another due to their patterns of colors. Males also have deeper, more robust bills.

The average lifespan of the African penguin is 10 to 27 years in the wild, whereas an African penguin living in captivity generally has a longer lifespan. Other penguin species live for about 15 to 20 years. Limits to aging are predation, human impact, and storm systems.

All four Spheniscus species resemble each other and share similar size and plumage charactertistics, but subtle characteristics allow them to be distinguished.

Source: BirdLife International and Handbook of the Birds of the World (2016) 2013. Spheniscus demersus. The IUCN Red List of Threatened Species. Version 2019-2

The African penguin is the only penguin species found on the African continent.

This species is endemic to southern African where it breeds in 28 localities in Namibia and South Africa. They also inhabit the Benguela and western Agulhas ecosystems and form colonies near a chain of islands between Hollamsbird Island, Namibia, and Bird Island in Algoa Bay, South Africa. African penguins have been recorded as far north as Gabon and Mozambique.

At sea, their distribution is mainly restricted to the greater Benguela Current region.

The primary viewing site of African penguins is at False Bay in Simons Town, South Africa.

African penguins are marine and usually found within 40 kilometers of the coast, coming ashore on islands or at non-contiguous areas of the mainland coast to breed, moult, and rest. They usually feed within 20 kilometers of the colony, when breeding, although at some colonies the distance is greater.

African penguins can remain out at sea for up to four months at a time.

African penguins gather in breeding areas called “rookeries.” They prefer flat, sandy islands with varying degrees of vegetation cover or steep rock islands with little vegetation for their breeding grounds. They can sometimes be found close to the summit of islands and may move over a kilometer inland in search of breeding sites.

African penguins are diurnal and spend much of the day feeding in the water. They also dive into the water on warmer days to keep cool. Throughout the night, these penguins spend their time gathered together on shore.

African penguins are social creatures that live in large colonies on the rocky coastlines of southwest Africa.
Adults generally nest colonially, but may also nest in isolation. At sea, black-footed penguins forage singly, in pairs, and sometimes cooepratively in small groups of up to 150 individuals. The primary viewing site of African penguins at False Bay in Simons Town, South Africa has over 2,000 penguins.

Adult African penguins are largely resident, but some movements occur in response to prey movements. The distance that African penguins have to travel to find food varies regionally, temporally, and spatially. On the west coast of Africa, a typical foraging trip could range from 30 to 70 kilometers for a single trip. On the south coast, foraging birds can cover an average of 110 kilometers per trip.

African penguins use three types of calls to communicate: bray, yell, and haw. The yell, or contact call, is used to defend a territory from another colony member. The bray, or display call, is used to attract mates and is used between partners in a colony. Penguins also perform displays that are used to establish nesting areas, help with partner/hatchling recognition and defense against intruders. The haw is used by partners when one is on land and the other is in the water.

Fighting between African penguins occurs occasionally and involves the beating of wings and biting. Often, a penguin can be observed chasing throughout the colony while clutching an opposing penguin’s back with his beak while beating the bird with his wings.

African penguins cannot easily preen their own heads and necks, and as such, participate in allopreening, or the preening of each other. This practical behavior allows for cleaning and rearranging of feathers and aids in the removal of parasites, such as ticks. Black-footed penguins often bathe within a few meters of the shoreline while shaking their bodies around wildly and preening themselves with their beaks and feet. When a penguin is by himself, using the foot to preen is the only option for reaching his head.

Up to 18 species of crustaceans are prey to the African penguin.

Juveniles are thought to prey on fish larvae.

When on the hunt for prey, African penguins can reach a top speed of close to 20 kilometers per hour.

The distance that African penguins have to travel to find food varies regionally, temporally, and spatially. On the west coast of Africa, a typical foraging trip could range from 30 to 70 kilometers for a single trip. On the south coast, foraging birds can cover an average of 110 kilometers per trip.

African penguins gather in breeding areas called “rookeries.” They prefer flat, sandy islands with varying degrees of vegetation cover or steep rock islands with little vegetation for their breeding grounds. They can sometimes be found close to the summit of islands and may move over a kilometer inland in search of breeding sites. Adult African penguins generally remain within 400 kilometers of their breeding locality, although they have been recorded up to 900 kilometers away.

African penguin breeding takes place throughout the year with peak months varying locally. In the northwest part of the African penguin’s range, in Namibia, peak laying occurs during the months of November to January. In the southern section of the penguin’s range, in South Africa, nesting happens within March and May. In the Southwest, it occurs between May and July, and in the East, the penguins breed between April and June.

African penguin courtship rituals typically begin with the male projecting visual and auditory displays to attract a mate. Head-swinging motions usually refer to ownership of nest site, attracting females, and can be used as a warning for other males. The next stage is used to ensure a mutual bond is formed; which involves a harsh vocal call released while extending the neck and head upward. The final stage includes bowing, where one or both penguins duck the head while the bill points at the nest or at the other bird’s feet.

In the past, African penguin nests were usually built in burrows dug in guano or sand. Guano collection has historically been a major cause of disturbance at many penguin colonies and today, the removal of guano has deprived penguins of nest-burrowing sites. This has caused the birds to start nesting on open ground where they are more vulnerable to heat stress resulting in the abandonment of nests, flooding of nests by rain, and increased predation. African penguins will usually dig shallow burrows under rocks, in sand, or under sparse vegetation. At some sites, artificial nest-burrows made from pipes and boxes sunken into the ground, and shelters shaped from dry vegetation have been regularly used by the species.

Incubation is shared amongst African penguins between both parents and lasts for about 40 days. All African penguins have a patch of bare skin at the base of their bellies, called a “brood patch,” that helps the parent provide direct heat to their eggs fro incubation. After the eggs hatch, the parenting pair feeds their young for about one month by regurgitating food into the hatchling’s mouth.

African penguin hatchlings are left alone in crèches, or groups, a characteristic common to bird species that breed in large colonies, while their parents forage for food.

Juvenile African penguins initially have dark slate gray-blue feathers that darken with age. In the penguin’s second year, the plumage begins to turn brown and in the third year, it shows varying amounts of adult facial pattern. The change from juvenile plumage to adult plumage takes around 3 years. Once an African penguin develops its juvenile plumage at about 2-4 months of age, it will leave the colony.

On gaining independence, juvenile African penguins disperse up to 2,000 kilometers from their natal colonies, with those from the east heading west, and those from the west and south moving north. Most birds that survive, later return to their natal colony to moult and breed, although the growth of some colonies has been attributed to the immigration of first-time breeders tracking food availability. The average age at first breeding is thought to be 4-6 years.

Natural threats of the African penguin include competition with Afro-Australian fur seal (Arctocephalus pusillus). The seals compete with penguins for food, displace them from breeding sites and impose significant mortality at some colonies.

African penguins benefit humans by ecotourism. They are a species that humans can approach closely and watch as they interact with their environment. The primary viewing site of African penguins is the colony at False Bay in Simons Town, South Africa. This colony has over 2,000 penguins.

African penguins are the most common penguin found in zoos due to their size and temperature requirements, which are easy to maintain. These penguins can be found on display at zoos such as the San Diego Zoo, Lincoln Park Zoo, Toronto Zoo, and Dallas Zoo.

There are no real negative economic effects of the African penguin on humans as they do not eat enough fish to be detrimental to the local fishing industry.

The African penguin is listed as Endangered by the International Union for Conservation of Nature and Natural Resources (IUCN) Red List of Threatened Species.

This species is classified as Endangered because it is undergoing a very rapid population decline, probably as a result of commercial fisheries and shifts in prey populations. This trend currently shows no sign of reversing, and immediate conservation action is required to prevent further declines.

Initially, their decline was due to the disturbance of nesting birds and exploitation and commercial sale of their eggs for food. Also, habitat alteration and disturbance associated with guano collection at breeding colonies contributed to their decline.

These factors have now largely ceased, and the major current threats include oil pollution and competition with commercial fisheries for pelagic fish prey. Mortality also occurs in fishing nets when gill-nets are set near colonies.

African penguin population declines have been attributed to food shortages, resulting from shifts in the distributions of prey species, competition with commercial purse-seine fisheries and environmental fluctuations. A decrease in foraging effort at St Croix Island and an increase in chick survival and chick condition at Robben Island following the establishment of 20 kilometer no-take zones provide some support for this theory.

In the early 2000s there was an eastward shift in sardine and anchovy, with the mature biomass of these species decreasing near the breeding islands north of Cape Town. The abundance of these prey species is known to influence breeding success, adult survival, and juvenile survival, all of which may often be too low off South Africa’s west coast to maintain population equilibrium.

In Namibia, where sardine and anchovy are virtually absent from the foraging ranges of breeding penguins, breeding birds feed principally on the energy-poor bearded goby (Sufflogobius bibarbatus). 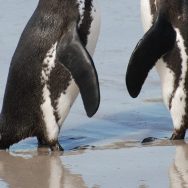 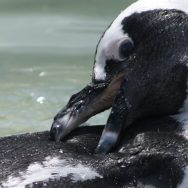 African Penguin - The African penguin is the only penguin species found on the African continent.

African Penguin - The African penguin is endangered and is undergoing a population decline, as a result of commercial fisheries, oil pollution, and shifts in prey populations.