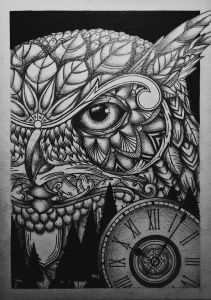 For this piece, I created a semi-realistic Great-Horned Owl using a traditional tribal art style using different patterns and textures. My main focus was to ensure that the eyes captured the intense emotions and mystery of such a magnificent creature. The clock tributes to the American Indian folklore of owls signifying approaching death, and is thus, counting down our time on earth. The tree line gives a better sense of nature and the owl’s natural habitat. The owl is one of my favourite creatures and so, I have rightfully represented it with an intricate crown piece made out of emblems and gems accompanied by large feathers that sit on it’s head. Though the patterns are not closely following the actual feathers on a Great-Horned Owl, it’s differences in size and designs give the illusion of different textures similar to those on owls themselves.

This site uses Akismet to reduce spam. Learn how your comment data is processed.