A Knock at the Door

Stephen Michael Scott II is a self-taught freelance illustrator originally from Middletown, Ohio, but currently working from Southeast Michigan. Legally blind in his right eye, he has adopted the name “Blind Coyote.” Stephen specializes in imaginative, yet realistic, illustrations featuring fantastical animal creatures in a variety of light-filled environments. He also enjoys creating anthropomorphic characters inspired by wildlife. An avid student of the arts, Stephen enjoys studying animal anatomy and sketching to hone his craft and improve his skills. Eager to share his knowledge, he regularly livestreams on Twitch Creative and uploads time-lapses of his progress on YouTube providing live entertainment and instruction to curious viewers.

Stephen frequents conventions where he offers prints and merchandise of his digital works. In 2018, he will be a Guest of Honor at AnthrOhio, an annual furry convention located in Columbus, Ohio sporting a relaxed atmosphere, tons of free food, and an attendance of over 400 guests.

Although Stephen has always harbored an interest in the arts, he didn’t seriously begin creating until late 2011, shortly after graduating from high school. Without a job, Stephen found himself with excess free time and wanted to explore something new. Finding inspiration from other artists, he decided to follow a creative path. “I saw some art streams and thought, ‘I could do that!'” he explains. Since then, Stephen has received no formal art training and remains completely self-taught.

Focusing mostly on digital media, Stephen mainly creates his works with a large Wacom Cintiq tablet using Adobe Creative Cloud applications, such as Photoshop. He occasionally creates with Clip Studio Paint. Stephen’s work focuses on animal-inspired subjects and often utilizes dramatic lighting, complex compositions, and a strong sense of portraiture. A master of light, he bathes his subjects in multitudes of colors and relies on shadows to frame his focal points. “My favorite part is bringing ideas to life,” he remarks. “I love playing with color and bringing more depth to a piece through different elements.” Often using a variety of resources and references, Stephen builds heavily layered environments to accompany his unique characters.

Recently, Stephen has been exploring spirituality and has been producing anthropomorphic animal characters embodying this interest. “I have to say my favorite piece of mine is Shaman(Spirit),” Stephen ponders. “It really marks a starting point for me as I dive more into more spiritual themed pieces.” With a vision-deficiency, Stephen allows the coyote to guide him through life as his spirit animal, thus inspiring his nickname, “Blind Coyote.” 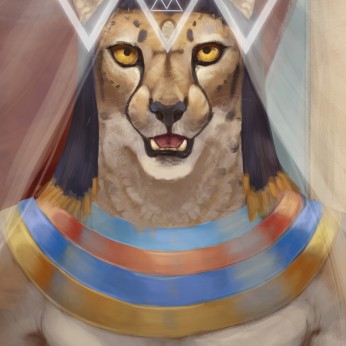 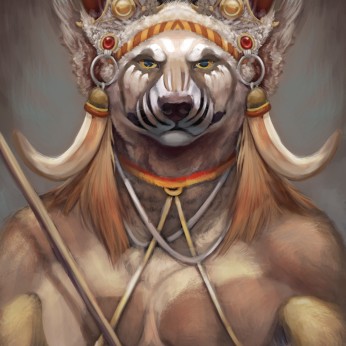 For those interested in pursuing the arts, themselves, Stephen suggests starting as soon as possible. “Start today,” he states. “Start by drawing a line on a sheet of paper; scribble until you see something. Who knows what could happen? We all say we will start tomorrow, then, before we know it, a year or more has passed, and we lost all that time we could be improving.” Stephen also recommends finding inspiration in the work of others, just as he did several years ago. “Look toward who inspires you, for by starting today, you can inspire someone who starts next month.

This site uses Akismet to reduce spam. Learn how your comment data is processed.